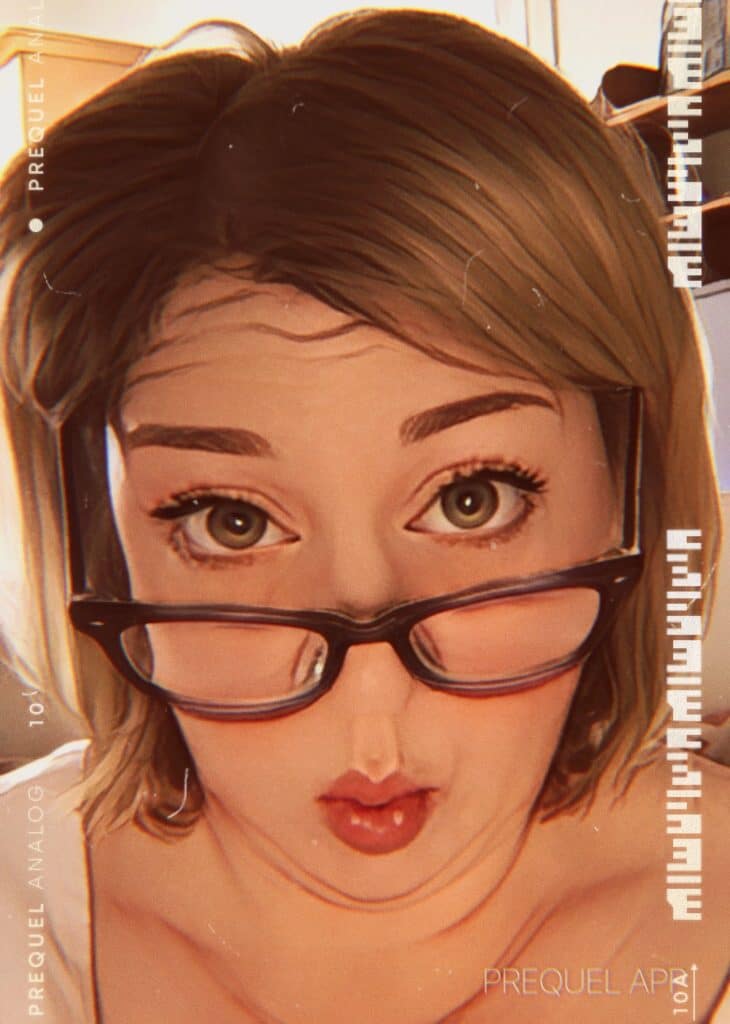 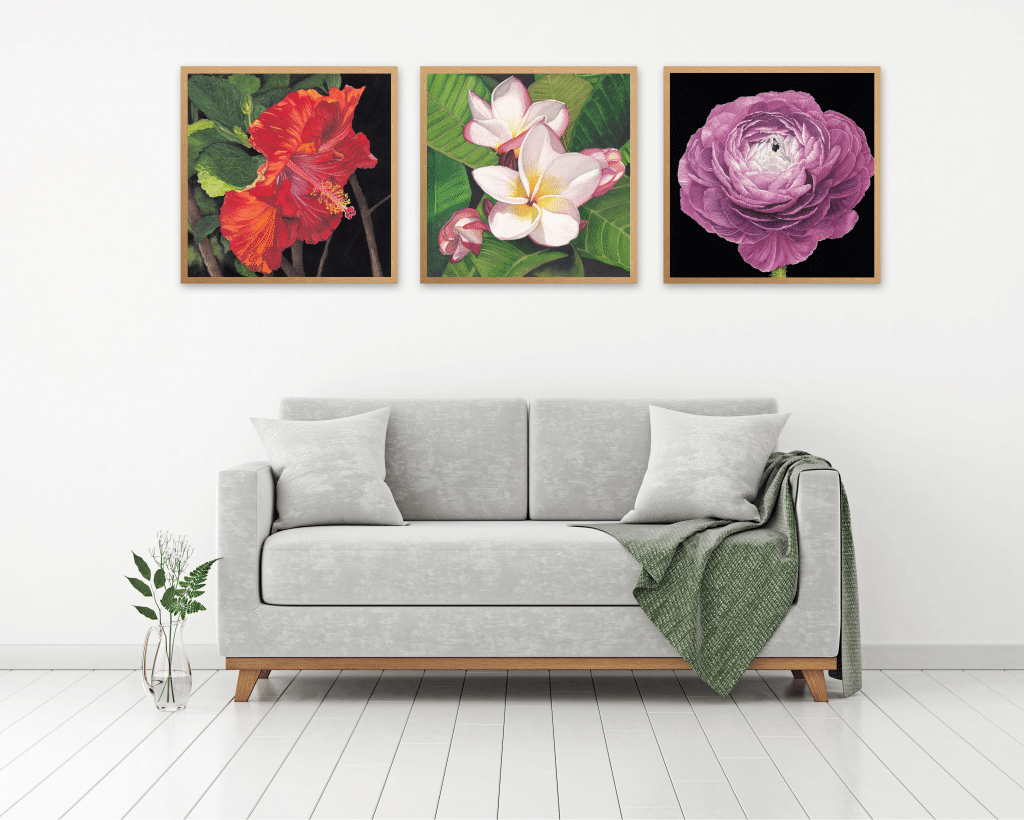 GET YOUR FREE ART PRINT TODAY!

Bring Serenity into your home and life with a print from this collection of three beautiful florals, originally painted in watercolors by world renowned artist Sarah Whyte. To introduce to her wide range of representational art, Sarah is offering one FREE 8×8″ print for a limited time only. You pay only a small S&H charge to get it to you from her studio in Alberta, Canada.

“I have a total of 6 Sarah Whyte paintings – 3 commissions, 2 originals, and 1 print. I love the colour, detail, and composition of every piece! She is a truly talented artist as evidenced by the variety of different media and subjects in her work.”

Hi friend,
Thanks for stopping by this page!

Today I’m offering you a reproduction of one of my Serenity paintings for FREE. This offer is part of my introduction to you.

The world is a crazy place right now. As an online elementary teacher through Covid, I felt my mental health slipping. I had been trying for many years to build my artistic practice part time while continuing to teach, but as all you teachers out there know, there’s never much time or energy left after the school day ends. In September 2021, after reading a powerful book by Glennon Doyle (Untamed), I knew something had to change to achieve my “truest, most beautiful life.” I knew that the deepest desire of my heart was to jump into my art full time and so, since September, I have slowly built up my strength through glorious, stress-free days of painting.

WHY AM I GIVING AWAY MY ART??

There are TWO reasons I’m doing this.

The last few years have been A LOT, to put it lightly. And it seems things aren’t really letting up. If my art can serve as a moment of joy or comfort, I want as many people to have it as possible. Is it going to stop wars, cure COVID or heal trauma? No. But could it serve as a place to rest your mind in the midst of a chaotic day? Maybe. I know the art in my home does that for me.

In fact, I recently learned that looking at art you find beautiful not only reduces stress, but can mimic the sensation of FALLING IN LOVE!?!? Neat, right?? If you’re anything like me, you could use more of that in your life these days.

So if you LOVE my work as much as I love making it, I want you to have it.

I want to find my people! Is that you? As an emerging artist, I need exposure. Getting my work into the hands of as many people as possible who LOVE it is the best way I can think of to do that.

So if you pick up one of my prints, printed on quality paper, and then hang it in your favorite spot in your home or office (or even turn it into a thoughtful, artful gift), who knows? One day you might just want to own an original.

Below this letter, I’ve laid out three paintings from my body of work for you to choose from.

I’m only running this promotion for a limited time. I’m not sure when it will end or if I’ll ever offer anything like this again. It truly depends on the response.

I want to make sure you are completely satisfied with your purchase.

That’s why I am offering a

I guarantee that you will LOVE the print you receive or I will refund 100% of what you paid, and you can keep the print anyway.

I live for creating, so I want to be sure you LOVE what you receive as much as I loved making it- that is why offering this guarantee makes sense to me. All you need to do is send me a direct email with the details on your receipt and you will get back every last penny (which I am grateful to say has never happened so far).

So this truly is a RISK FREE offer. (Just a heartfelt piece of art for you to enjoy.)

My hope is that you will LOVE what I send you and this is only the beginning of a great relationship for years to come!

If you are still with me and you want to order a print, here are the next steps:

Take a look at all 3 print offers and choose your favorite painting.

Only pay for shipping & handling.

Receive your new piece of wall art and hang it somewhere it will remind you to breathe.

If you have any questions, you can send me an email at [email protected].

Thank you for taking time to read this. I cannot wait to mail your new piece of art to you!

Each of the paintings in my Serenity Collection was created in a quiet, peaceful space from a heart full of love for the beauty we see all around us on a daily basis. Below you’ll find 3 prints to choose from in 8×8” size for FREE (you just pay a small fee for S&H). One free print per person, please. You’ll have the option to upgrade sizes, or to buy the whole collection at a discount if you choose. Most importantly, regardless of which option you select, you’ll know that you are supporting an artist living her “truest, most beautiful life.” Thank you. 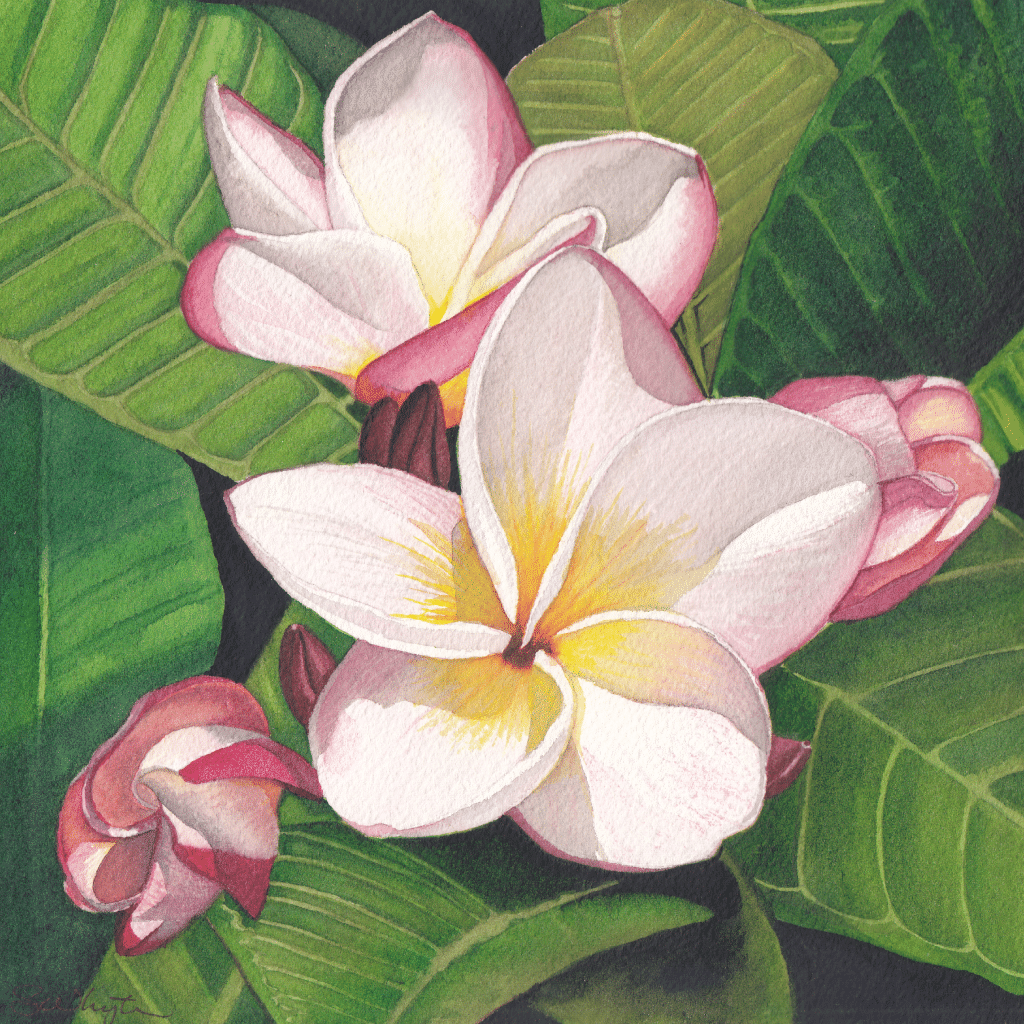 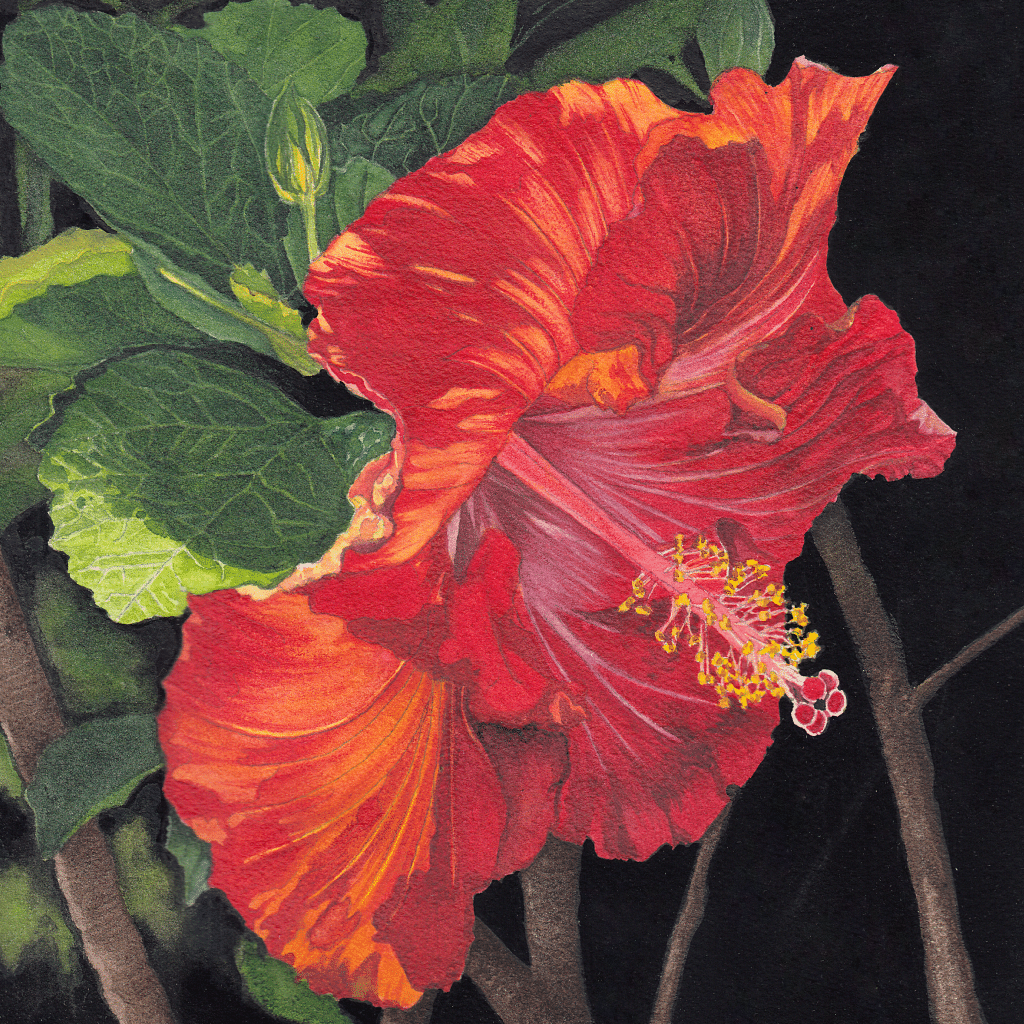 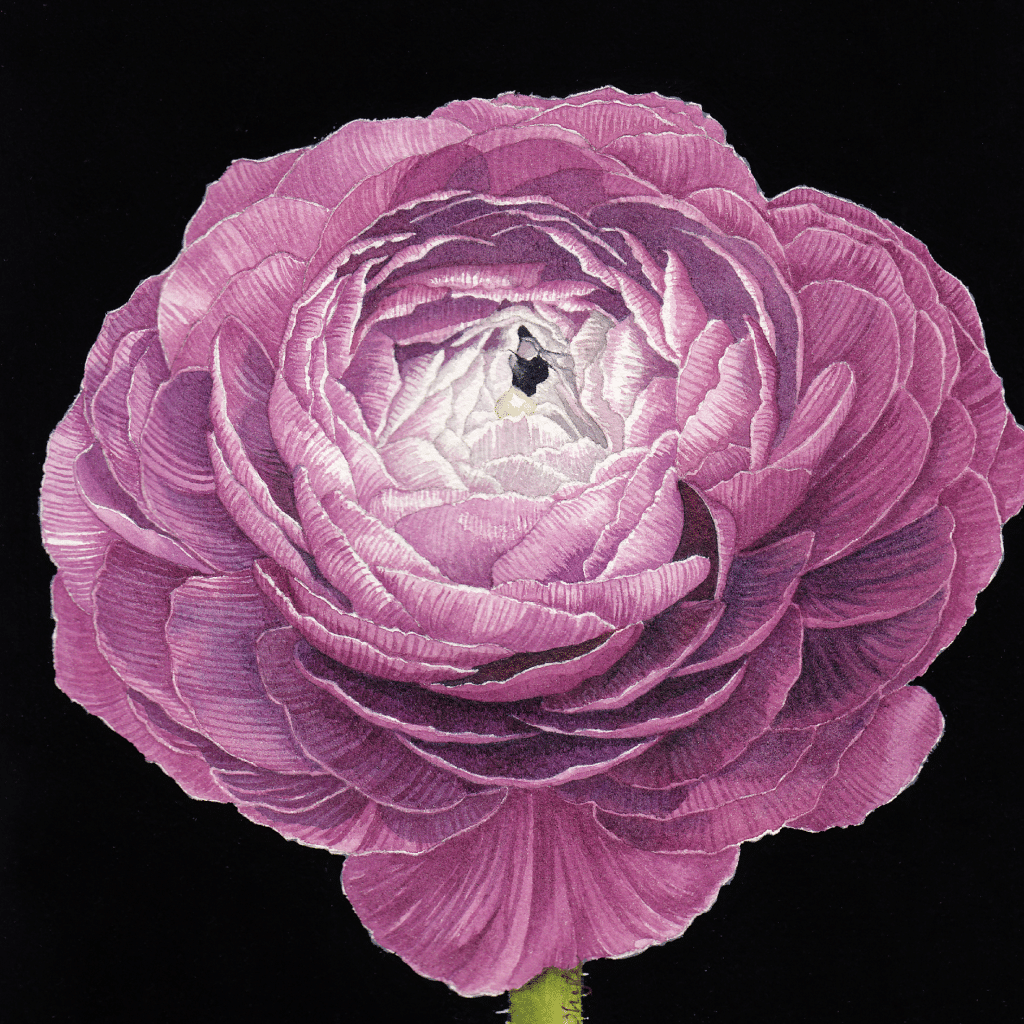 This artwork features an incredible level of detail that is best appreciated at a larger size. Your 8×8” free print will look fantastic, but if you really want to see all the wee details, consider a one-time discount on a size, paper, and process upgrade …

Giclées are extraordinarily accurate, museum quality prints. My giclées are created using extremely high resolution (600 dpi) scans, which are color calibrated then printed on heavyweight (230 gsm), museum quality acid-free cold press paper for a longer print life with pigment inks. Your upgrade will include a beautiful 16×16” reproduction with 1” white borders on archival paper with the highest quality inks. This size and quality of print sells regularly for $80 each, but on this page only you can select this exclusive upgrade for only $45, and I’ll pay the S&H!

HERE’S WHAT YOU GET:

Add a size and quality upgrade to your order TODAY for Just $55! That’s over 43% off, available ONLY on this page.

If you ordered your set of three prints on the previous page, and you’d like them in this larger size and greater quality, click the button below to add the upgrade to your complete set! I’ll even sweeten the deal …

Add a big dose of SERENITY to your walls and your life!

“I love the rose I gave my daughter-in-law, and the gladiola I have is to die for!! I see it every trip through the living room. It makes me smile!” 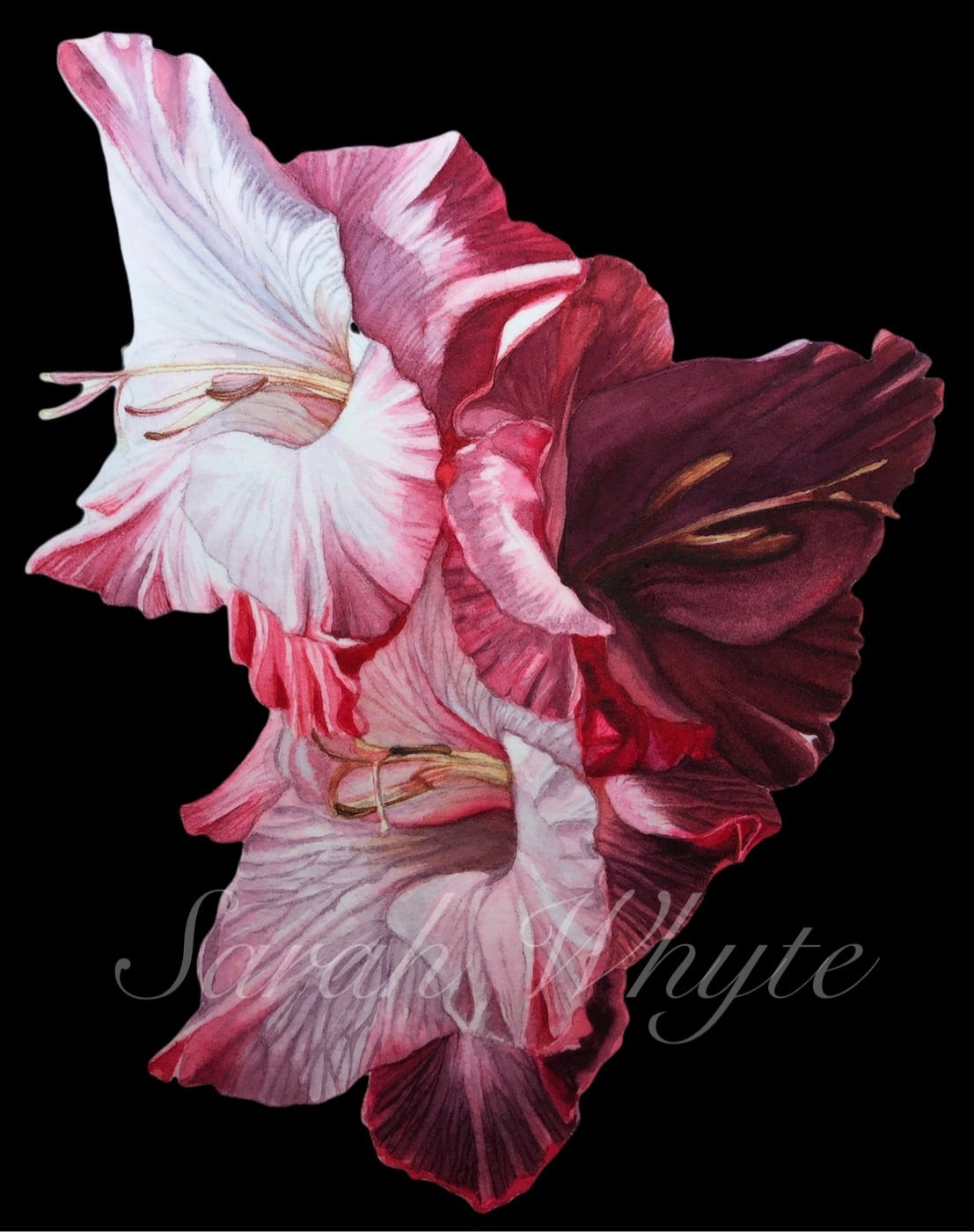 C. LongoOH, USA
“I went to the Calgary Zoo a few years ago when they had some pandas on loan from China. I got to see them in person for the first time, and one of them was eating bamboo almost exactly like the painting [Sarah] did. As soon as I saw [her] painting, I was automatically drawn to it and kept on going back to [her] site to look at it again. I was so excited to own it!” 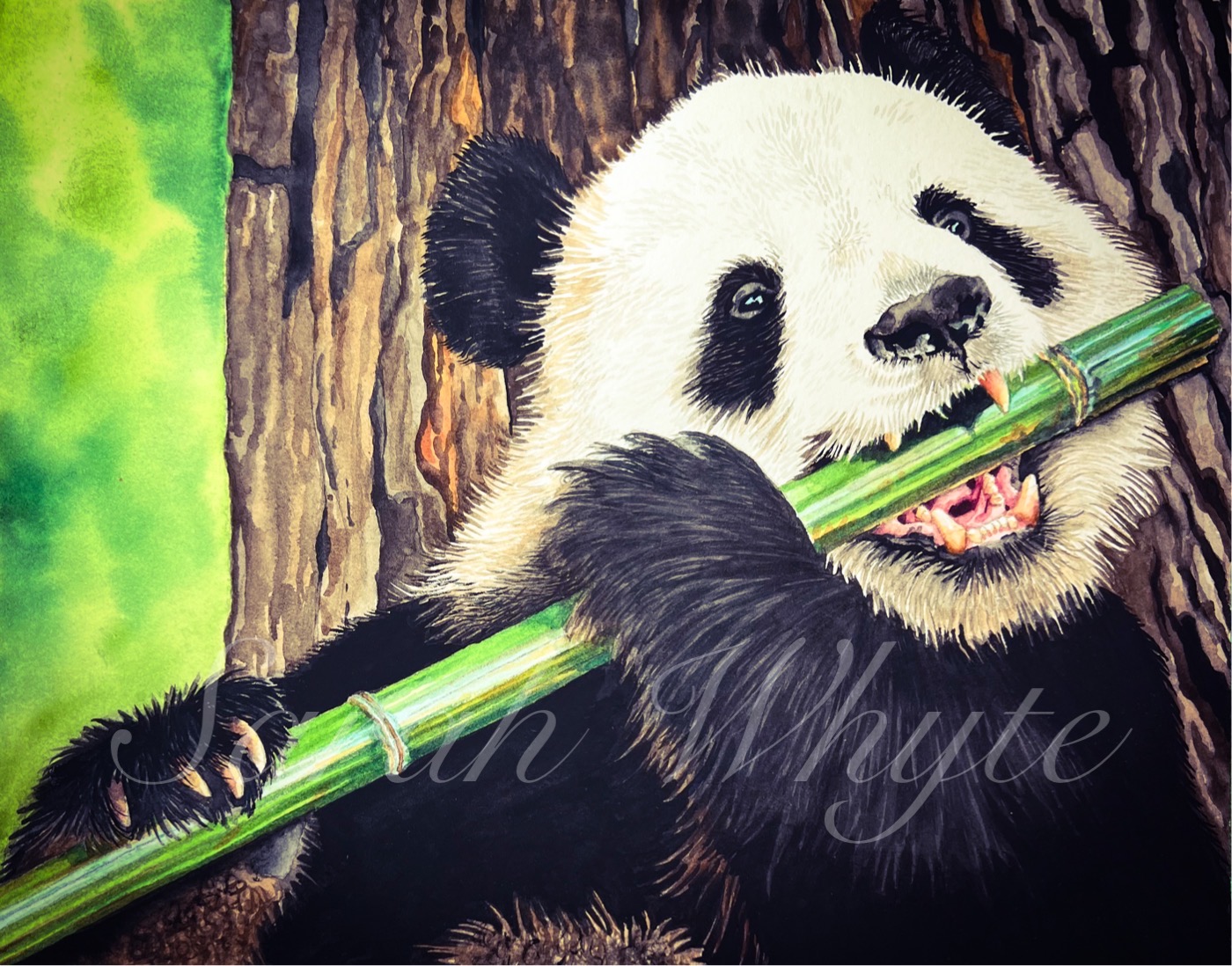 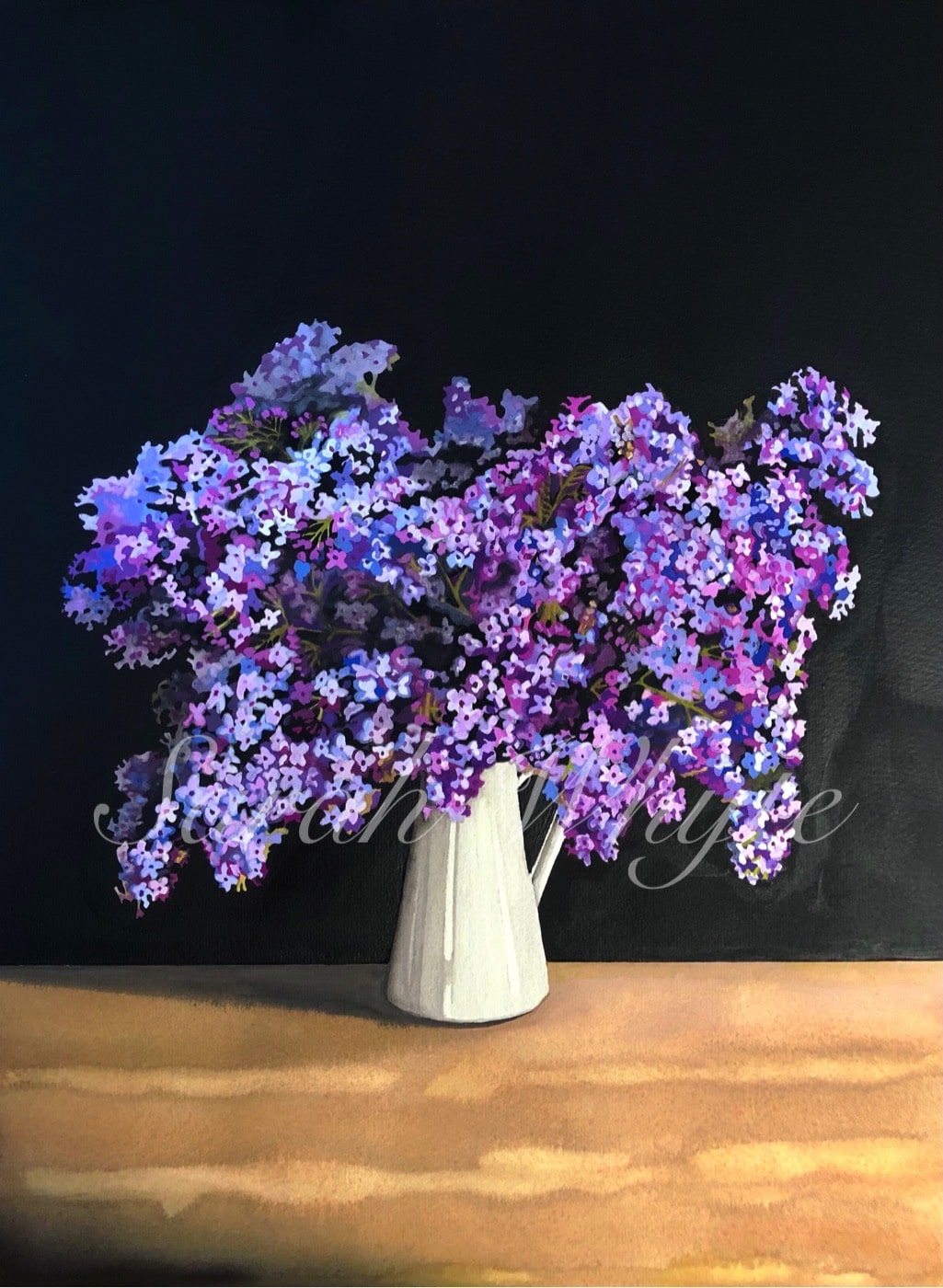 L. MurphyAZ, USA
“My beauties arrived safe and sound! Thank you for the pretty bookmarker and sticker. I just want all of your art! And I may just get it all!” 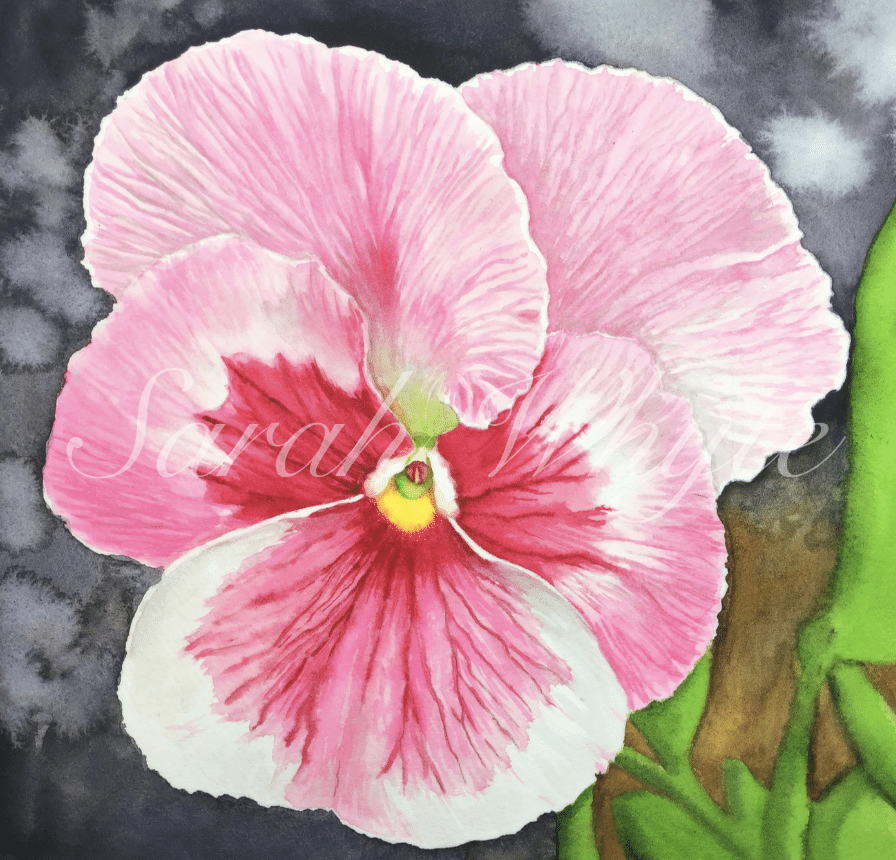 C. JohnsonWA, USA
“I absolutely love my puffin painting! It is so life-like - the attention to detail is amazing! I can’t wait to purchase more art from Sarah!” 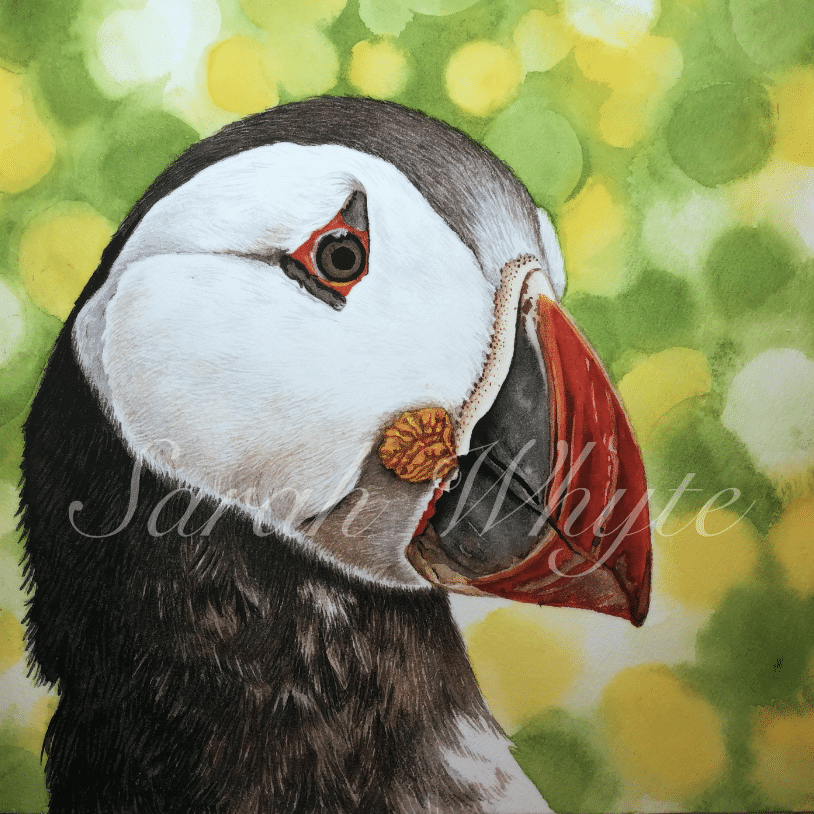 T. SchendtNE, USA
“I have a total of 6 Sarah Whyte paintings – 3 commissions, 2 originals, and 1 print. I love the colour, detail, and composition of every piece! She is a truly talented artist as evidenced by the variety of different media and subjects in her work.” 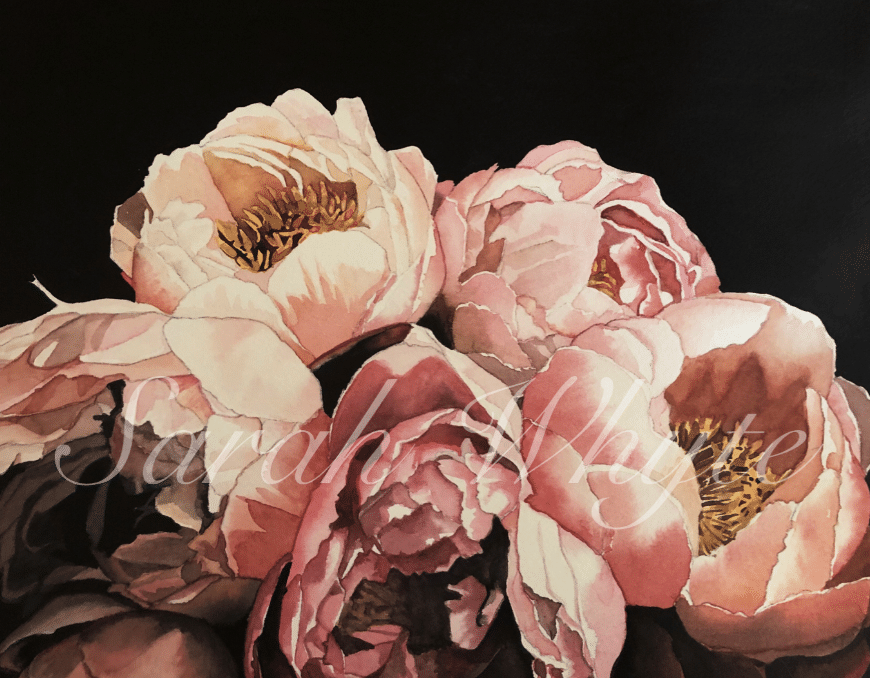 L. ScheerschmidtAB Canada
“I cannot tell you how beautiful my lilacs & my daffodils are & how much joy they bring to me 🥰🧡 They make me smile every time I see them—& that’s because of YOU & the wonderful talent that you have for making masterpieces. 🧡Many thanks again!”
“Thank you Sarah! Your work brightens me EVERY DAY—YOU'RE MY THERAPY!” 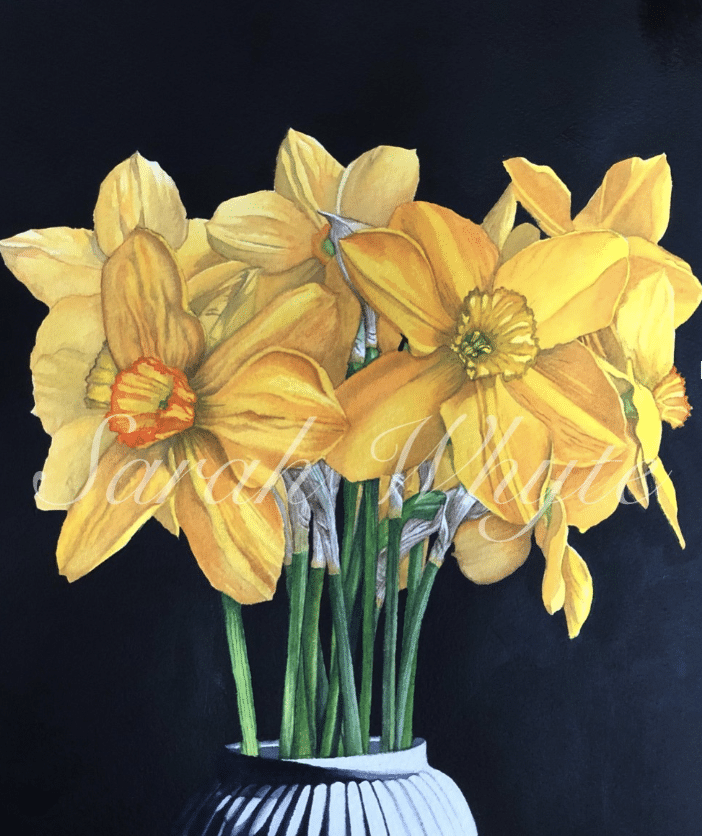 L. RistucciaNY, USA
“Sarah's use of bold color and her ability to coax depth, dimension, and realism out of watercolors is enchanting. She is always challenging herself with new subjects and how to bring them to life. While I enjoy her animal paintings and appreciate the personality embodied within each one, my favorite pieces will always be her florals. They are stunning.” 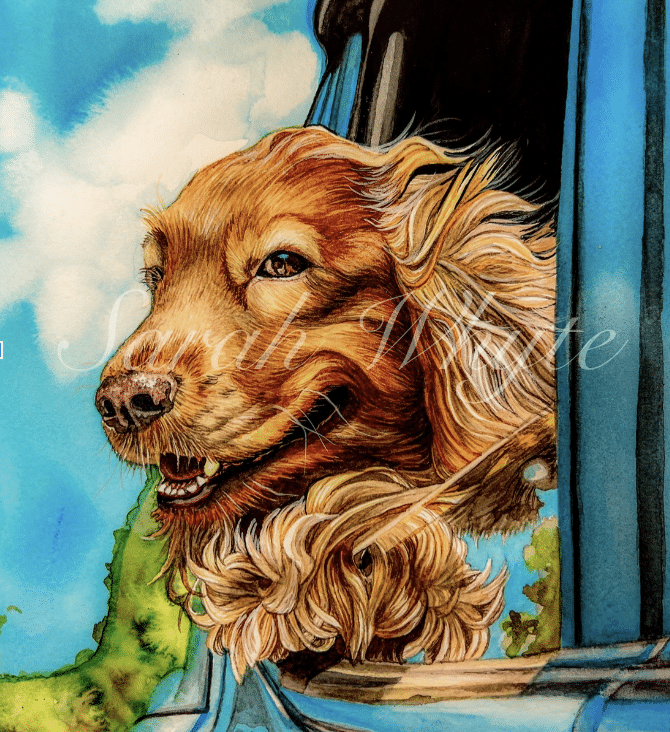 Sarah Whyte spent much of her childhood in the Okanagan Valley (British Columbia, Canada), where she and her best friend spent hours drawing and painting together. She continued her passion for art after moving to central Alberta as a teenager, arranging items in her home to draw as still lifes. Growing up in a small town offered few opportunities for art, however, so Sarah was never able to receive formal instruction. Upon entering college in New York State, she chose to pursue a degree in History and Education and remained a simple hobbyist when it came to her creativity.

Today, Sarah remains a self-taught, Alberta-based artist. As a teacher, she took a job teaching K-8 art in Florence Arizona in 2012, but due to funding cuts, was forced to move back into general elementary education. Although losing that position was a disappointment, the year she spent in an art classroom gave her the necessary push to expand her dreams. She and her family moved back to Alberta in 2015, where Sarah has since pursued her creative goals vigorously.

Sarah has taught art workshops in the Edmonton region in various mediums, including watercolors, acrylics, and alcohol inks, and is always on the lookout for new ways to express her creativity. Her current focus is on the beauty, complexity, and depth of macro florals, inspired in part by the twentieth century work of southwestern artist Georgia O’Keeffe. Sarah finds added inspiration in wildlife and portraiture. 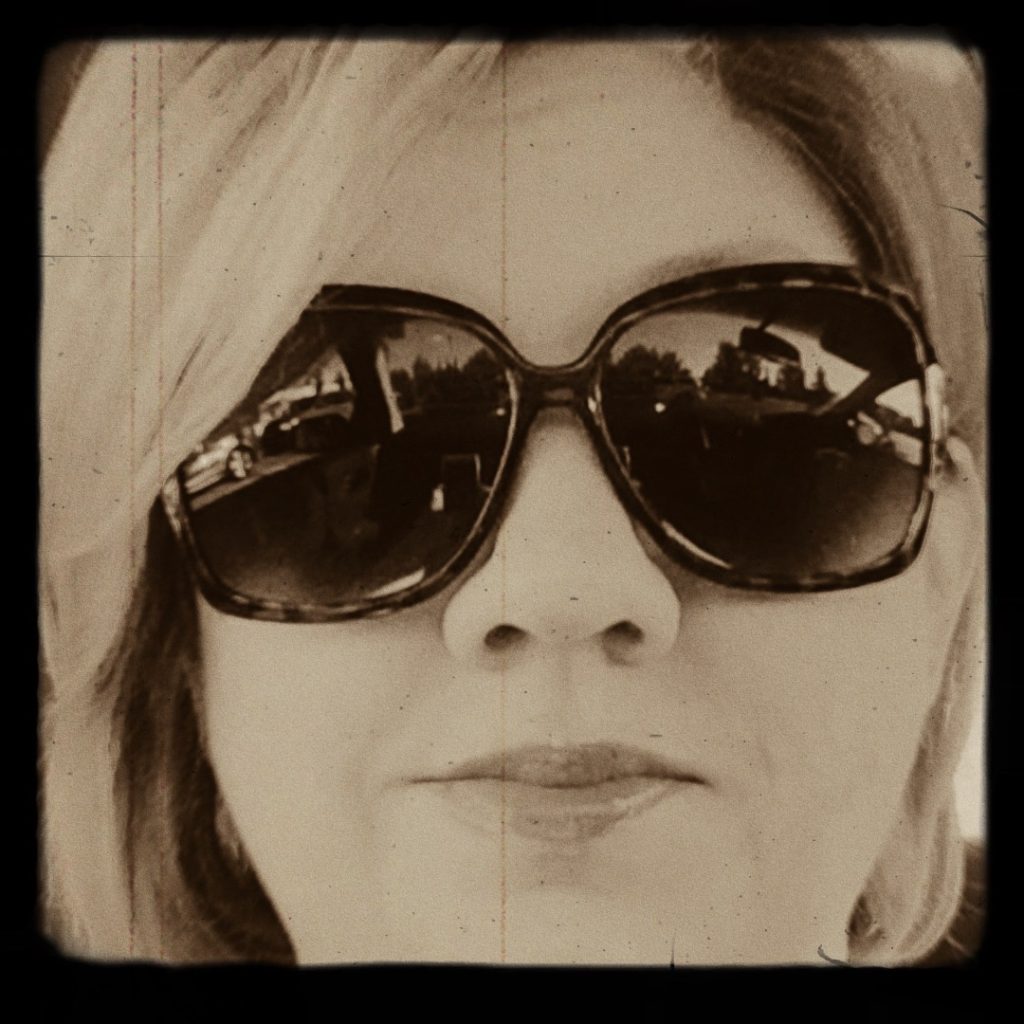